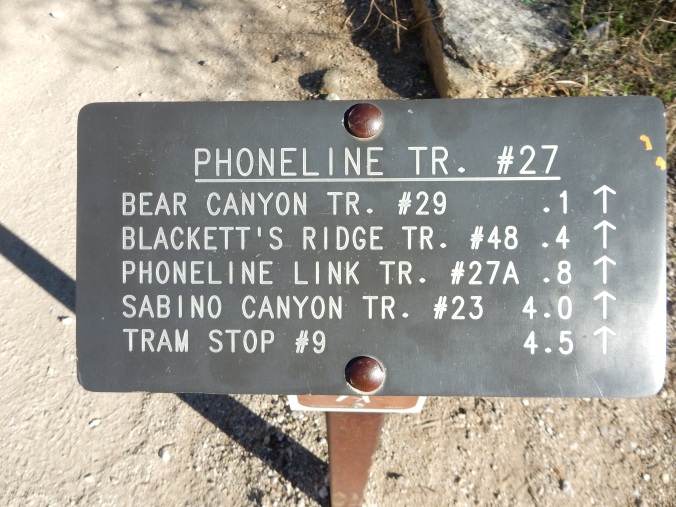 I am not a competitive athlete.  I played tennis in high school and I ran a four-mile race back in the 90’s.  Exercise wasn’t a major part of my life until I moved to Arizona when I was in my forties.  I just couldn’t resist the gorgeous terrain and beautiful weather.  I became a regular hiker.  And while I routinely hike at a pretty good pace I’m not much into timing myself and tracking my “progress”.   Historically, the more I hiked the better I felt, both mentally and physically, and the more easily I could manage my weight.  Not very complicated.

While being vegan is undoubtedly a gift to the body, and I’ve been starting to feel the effects of improved nutrition (better sleep, no gluten sensitivity, lighter and leaner). I hadn’t given very much thought to how the change in diet would impact my hiking.  I started thinking some about this when I listened to podcasts of two very accomplished athletes discussing their competitive successes which were fueled by plant-based, whole foods diets.  The first athlete, Mark Frazier, is an ultra-marathoner (his website, “No Meat Athlete” is here)and the second is Brendan Brazier, a former professional Ironman triathlete and ultra-marathoner (his website, “Thrive Forward” is here).

What I learned was that neither of these athletes went vegan for ethical reasons. While they have feelings about this now, these guys were each seeking an eating approach that would best lead to improved athletic performance.   And we’re talking crazy high-level performance here.  After trying out different combinations of food, they each settled on entirely plant-based diets.  One often-mentioned benefit to the vegan diet was improved recovery time.  Faster recovery = more training.  This certainly made sense to me since I believe that our bodies have an incredible capacity to heal themselves if given the best nutrition.

So four months after going vegan, this got me thinking about testing out my own level of hiking fitness.  And that brings me to the Phoneline Trail in Sabino Canyon.  David and I hike all over this canyon but there’s a half mile stretch of the Phoneline Trail that has always given me fits.  It’s not the steepest part, but it is a section of sustained incline with no switchbacks (oh how I love switchbacks).  When we first moved into our house I routinely climbed this section of the trail and I seldom did it comfortably, even after several months.  Eventually it started to dampen my enthusiasm (bad!) so I devised different trail combinations and avoided that part.

Well, this weekend I decided to get back on Phoneline.  I didn’t really expect to see a big difference.  Man, was I wrong!  Not a huff or a puff.  Zip, zip and it was done.  I didn’t feel tired, winded or depleted. I finished the rest of the hike (probably another few miles) feeling totally energized. While it’s impossible to say definitively that my vegan diet caused the improved performance, the ease with which I scampered up that trail was pretty hard to ignore.

It’s exciting to consider that in my mid-fifties I can, with a change of diet and consistent, reasonably intensive exercise turn back the clock and potentially feel and perform better than I did a decade ago.

It’s almost June which means that here in Tucson we are entering a dry, dry season.  I expect that we won’t see another drop of rain until the monsoons start, usually in July some time.  As you can see in the photo above it’s pretty crisp out there;  the canyon that was full of color a month ago has become a classic desert landscape.  That being said the desert is still full of unexpected delights, but it’s very easy to miss them if you’re not paying attention.

Getting My “Kid Mind” On

Yesterday during our walk we saw lots of families.  The weather was perfect and it was a little later than we usually go so this wasn’t surprising.  We were tooling along when we heard the excited voice of a 7 or 8 year old boy.  He had noticed this 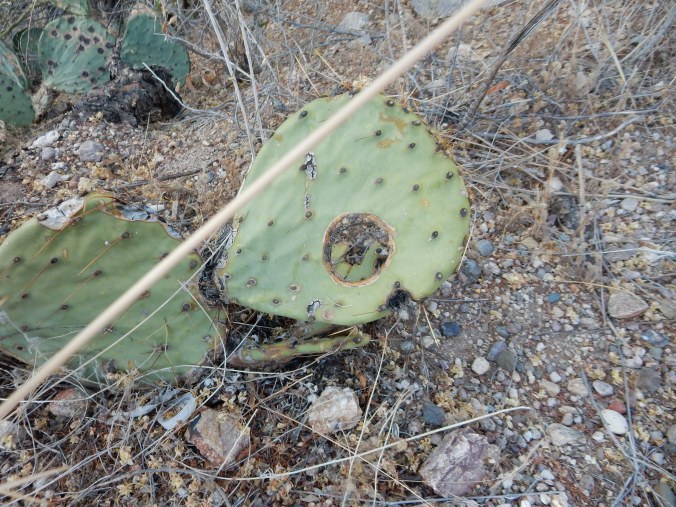 and was calling to his mother who was grimly walking along ahead of him pushing a baby stroller up a hill.  He caught up with his mother and shared the wonder of his discovery (“it must have been an animal that did that!!!”), and his mother responded in some way that effectively ended the conversation.  While I wish that this boy’s mother could have joined with him in his wonder,  I started thinking about all that we don’t see because we are too preoccupied to look.  It’s virtually impossible to grow into adulthood and not have our childlike way of perceiving the world disappear.  But I fervently believe that we can reconnect with that “kid mind” and really start seeing.

Today I took my camera along on our walk with the intention of getting a shot of the cactus with the hole in it that so delighted the young boy.  Along the way I saw some incredible things.

Amid all the brown on this hillside I caught a glimpse of the yellow/orange blooms of a cactus that (if I remember previous years) blooms later than most.  I zoomed in for a closer shot: 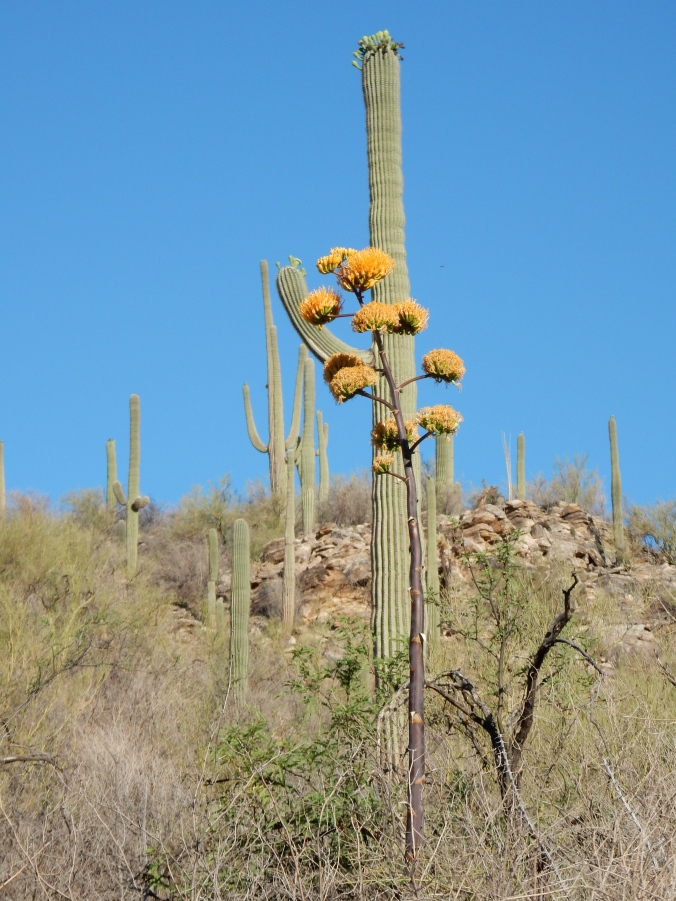 These blooms aren’t quite as vivid as I remember but that bit of color was quite a treat.  The saguaros are also past their peak and most of them look like this: 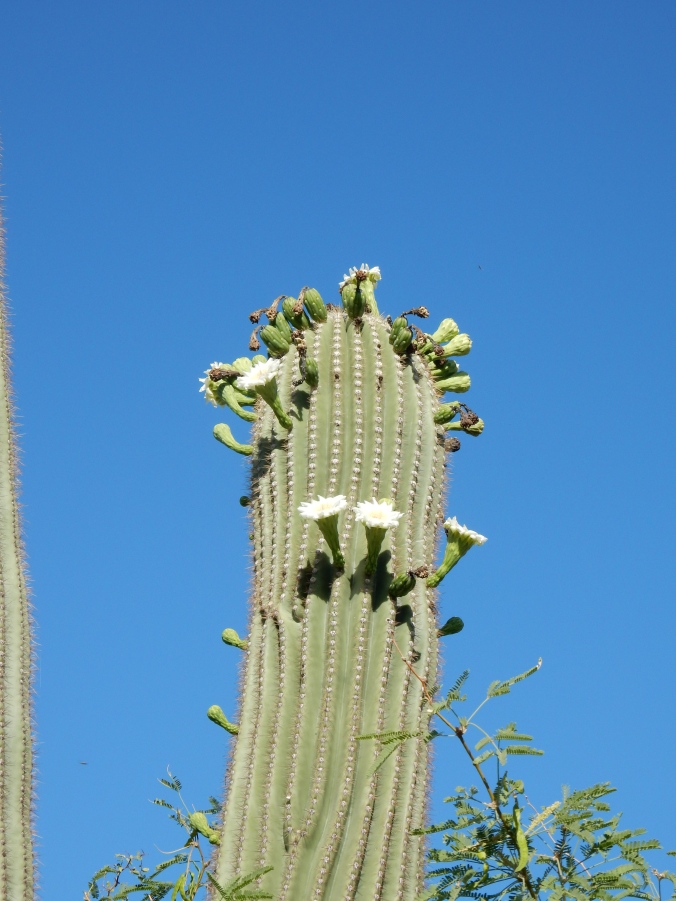 A few of the flowers are hanging on but many have wilted.  But this was an unexpected sight: 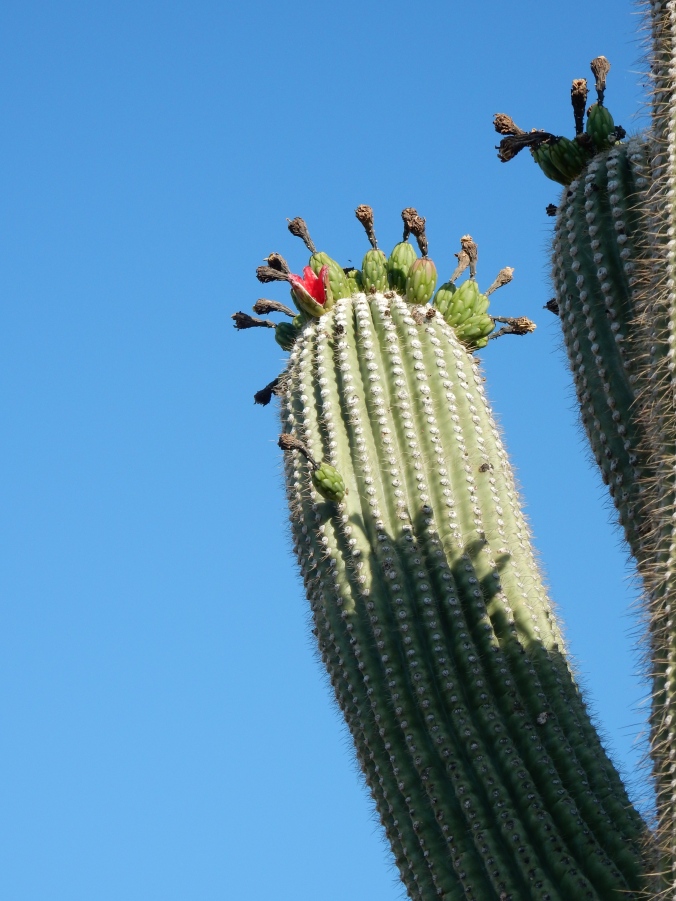 At first I thought it was a pink flower but upon closer inspection: 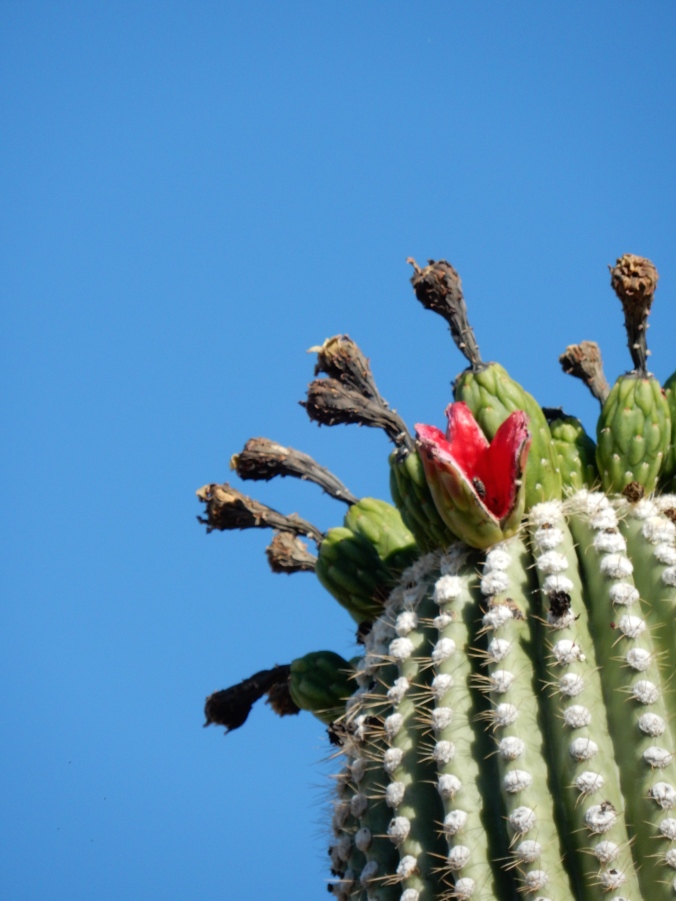 It appeared to be a fruit!  And just in case I wasn’t completely sure: 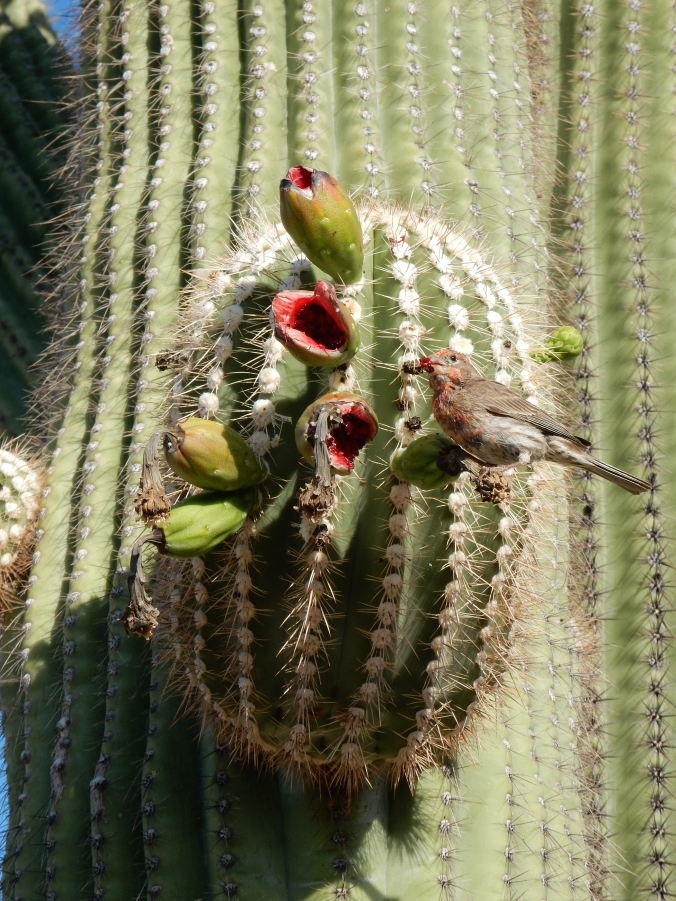 This guy clearly dove in head-first!  Good for him.  Hopefully he will not be using our pool for a bird bath!

Finally on the road home we caught a glimpse of this: 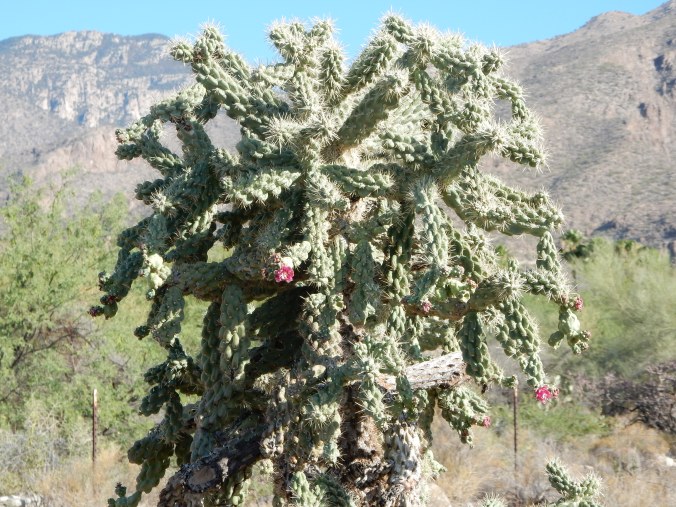 With the zoom lens…

And last but not least:

Beauty is everywhere even when it doesn’t seem like there’s very much to see. Or hear. Or taste. Or smell. Or feel.

We just need to open up and let it in.